Shane McEntee TD, Minister of State at the Department of Agriculture, Food and the Marine with special responsibility for Food Safety, Forestry and Horticulture, announced the winners of the EirGrid Euro-Toques Food Awards 2011, on Monday last, 17th October, at a press photocall in EirGrid, Dublin 4.

Euro-toques Ireland, the Irish branch of the European Community of Chefs and Cooks, presents annual Food Awards that honour food producers or individuals who have made an outstanding contribution to Irish food. A recurring theme this year with all recipients is the importance of putting a value on our primary raw agri-food products and acknowledging the quality of Irish farm produce, This year, each winner demonstrated their passion and commitment to Ireland’s traditional culinary heritage alongside an entrepreneurial spirit through creating a market for themselves. These farmers have recognised themselves as food producers, and business operators, and formed direct relationships with local cooks and chefs.The farmer has often tailored their product and service to meet the needs of restaurants, while the chef has adapted to the seasonality and handling of fresh, unprocessed ingredients.The EirGrid Eurotoques Food Awards are unique as they are championed by chefs and the recipients are each nominated by top chefs and cooks in the industry.

The five winners this year are: Gold River Farm, Aughrim, Co. Wicklow for their organic pork; Comeragh Mountain lamb,Waterford for their unique hill lamb; A Growing Pleasure, Naas, Co. Kildare for their micro-herbs and salads and free-range, rarebreed pork; as well as dairy farmers Tiernan Family Farm, Dunleer, Co. Louth, and educational facility on organic horticulture The Organic Centre, Rosinver, Co. Leitrim, who are receiving a special award for their contribution to Irish food. This is the second year EirGrid has sponsored Eurotoques Food Awards. As operator of the national electricity transmission system, EirGrid engages with the farming community on a regular basis. Indeed, it could not carry out its function without the cooperation of the farming community across whose lands much of the electricity transmission system is located.

The winners were presented with their awards by various members of Euro-toques Ireland, including founder, Myrtle Allen, at a reception held in Residence Private Members Club, Dublin. Willie Drohan, Comeragh Mountain Lamb. Comeragh, Waterford championed by Michael Quinn, Executive Head Chef at Waterford Castle: Farmer Willie Drohan is the sixth generation of his family to herd sheep in the Comeragh Mountains. The Scottish Black-faced sheep that Willie herds were introduced to the areas by landlords in the 17th and 18th century. From the age of ten,Willie had a passion for shepherding sheep an interest developed and nurtured by his family who passed on their tradition, skill and experience to him, that they in turn had learned from their ancestors.

Drohan’s herd roam free range over extensive areas of the Comeragh mountains. They graze over a much broader and more varied landscape than the lowland varieties. On the mountains, they eat grasses, herbs, wild flowers, heathers and drink natural spring water, all free from chemicals and pesticides. Due to this fact they have significantly more omega 3 fatty acids in their tissues than average lamb. The lamb is slaughtered locally by an artisan butcher and is dry aged for ten days. All of this contributes to the unique, distinctive and delicate flavour of Comeragh Mountain lamb. Here Euro-toques recognise a food with true ‘terroir’, a product of its natural surroundings, something that could not be recreated anywhere else, because the flavour results from the unique combination and variety of foodstuffs and environment. Like the other farmers being awarded today,Willie started putting a value on his product, creating a market for it and getting the price he needed and felt it deserved.

Encouraged by Chef Michael Quinn from Waterford Castle, Willie now also supplies other restaurants directly, as well as Ardkeen Stores in Waterford and farmers markets, and sells direct to consumers through his website. www.comeraghmoutainlamb.ie 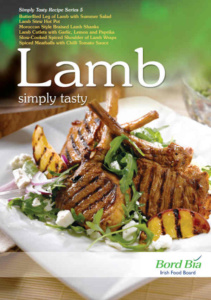